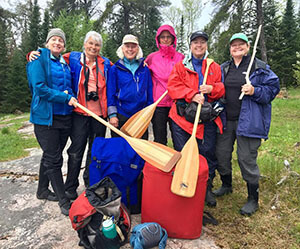 by Suez Jacobson As posted on Great Old Broads for Wilderness It was a “win” in the Broads’ online auction that took me to the Boundary Waters in May 2017 with Peta Barret and Women’s Wilderness Discovery. I’d waited almost 50 years. The Boundary Waters Canoe Area Wilderness (BWCAW), remote and wild, stretches out over a million acres … Read more 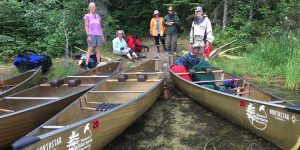 Twin Cities Outdoor March 11, 2020 Women’s Wilderness Discovery, based in Ely, has been bringing women into the Boundary Waters—year ’round—since 2014. Many of these women are from the Twin Cities, and many of you who read TCO love the Boundary Waters area. So I asked founder and owner, Peta Barrett, to tell us about … Read more 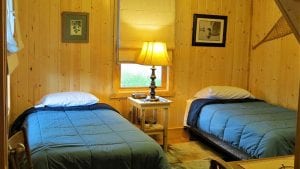 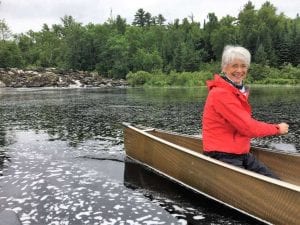 by Alissa Johnson Quetico Superior Wilderness News Last spring, wilderness guide Peta Barrett and a client walked across a portage in the Boundary Waters Canoe Area Wilderness. Her client, a confident, fit woman in her mid-60s, carried the canoe. She had expressed some concerns about doing so but was game to try with Peta nearby. … Read more 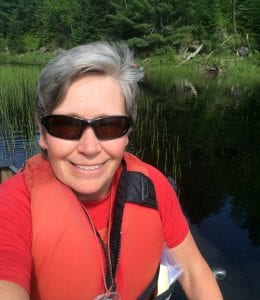 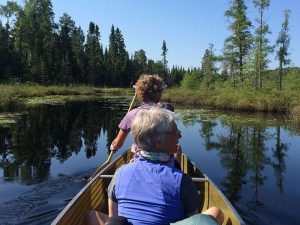 Women’s Wilderness Discovery offers year-round trips through the BWCA. Article from Minneapolis Star-Tribune, October 21, 2015 by Anna Pratt After owning a casting company for over a decade, Peta Barrett yearned to make the wilderness her “office.” Driven by her lifelong love of the outdoors, Barrett moved from her home of 35 years in northern Anoka … Read more 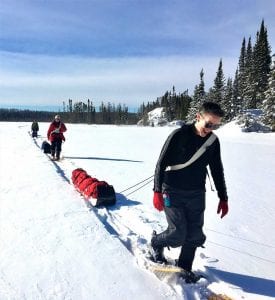 Deep winter in the boreal forest settles in with a stunning coat of pristine white, bundling the landscape in hushed magic. Here, caught up in crisp sunlight… there, below the pale glow of a full moon, winter’s coat glints the illusion of oh-so-many diamonds scattered about. Winter brings a unique clarity – a silence – to the wilds of … Read more 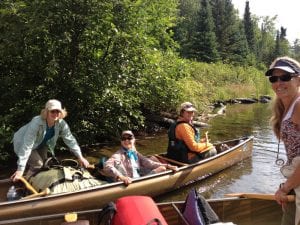 I have always loved the outdoors! I grew up, not on wilderness camping, per se, but in a family who respected all of nature…the land, the waters, the animals, and proper management of these elements to protect our valuable resources. Growing up in a family of five kids, we did plenty of “car camping” when … Read more 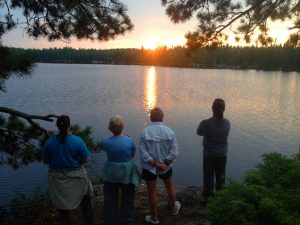 Because it’s a myth-buster! It’s not brute strength… for women it’s teamwork and finesse, a CAN DO attitude with an open mind and a willing heart….And really great trail packing! Step aside guys, women can organize a load and hustle down a portage trail faster than you can figure out who’s carrying the fishing … Read more

One in a Million
“Our guided Boundary Waters Wilderness trip with Peta Barrett was one in a million! Who knew when my parents bid on and won a guided Boundary Waters trip with our then-BOSS (owner of the talent agency my wife and I were both registered with) at a live-auction fundraiser it would be an experience quite like this one was.  From the start, Peta was clearly experienced, outfitted, wilderness-wise, and prepared.  It was clear we were in GOOD hands!  She handily made up for gear we didn't have (which was most of it) and struck a perfect balance of suggesting routes and activities, even menu items (more on this later) while also leaving most decision making up to us as to what we really wanted the trip to look like.  Our trip included an evening to plan things out at her house with her, where we set our menu, looked at maps and chose a general route, talked dates and times and gear lists, etc.  The actual trip was a total blast! Peta pushed us where we needed to be pushed and just chilled when it was time to relax.  And the FOOD!  We ate like kings and queens and Peta's cooking was truly something worth raving about. This was no camp food folks, even though it was tight packed, vacuum sealed and made over a fire. Once we found a base campsite, which we decided on instead of moving around everyday, she suggested a few things and otherwise let us choose what we wanted to do.  We made memories on that trip We'll carry the rest of our lives, surely.  To this day, I am quick to say that if I get to take one person with me with which to survive in the wilderness, it would be Peta Barrett!  Granted there would most likely be a colony of us all showing up together in said wilderness with Peta, since anyone who knows her would be a fool to choose otherwise. (Nathan’s parents Randy & Gayle Cousins were on the trip, too!)”
Nathan & Stephanie Cousins