We’d like to introduce you to our exceptional roster of wilderness guides. The collective canoe country knowledge and expertise runs deep among these amazing women. Each of our guides looks forward to welcoming you to our beautiful Boundary Waters in all seasons!

Sue has a degree in forestry with an emphasis in recreation and that is what she loves to do – recreate in the woods. She worked for the US Forest Service on the Monongahela and Superior National Forests doing forestry, recreation, fire, environmental planning, and wilderness management work. Sue retired in 2017 and now spends time hiking, skiing, camping, traveling, touring, and still finds time to volunteer with several nonprofits. She delights in staying active and engaged, and helping others do the same.

Taylor moved to Ely, MN in 2014 for college, and received her Associates Degree in Outdoor Leadership and Education. She has spent every summer in Ely since then. Taylor enjoys exploring the wilderness that surrounds the town in all seasons and types of weather. She spent two winter seasons running sled dogs just outside of Jackson, Wyoming where she fell in love with winter and all that this beautiful season has to offer. Taylor has been guiding since 2016; loves the work and the interaction with the people she guides. Taylor is very passionate about paddling, fishing, hiking and the wonderful wilderness that she is able to call home!

Anna Heil was born and raised in San Diego, California but discovered a love for the Boundary Waters when she visited for a week-long dog sledding and winter camping trip over New Year’s Eve in high school. After receiving her degree in Environmental Geography at Colgate University in upstate New York, Anna moved to Minnesota in 2016. After working for Voyageur Outward Bound School and REI, she started guiding for Women’s Wilderness Discovery. Anna is now the Fall, Winter, Spring Program Director at YMCA Camp Northern Lights, and lives year-round in Ely.  Anna’s favorite part of guiding is sharing her love of camping while allowing space on trips for both introspection and laughter.

Martha has loved the Boundary Waters and Quetico since first encountering them in 1971 as a student on a five-week Minnesota Outward Bound Course. She spent decades checking the want ads in Ely, MN and other communities surrounding the BWCA looking for a scientist job that would keep body and soul together plus provide for retirement. Although she failed in that original mission, she spent 18 “seasons” instructing for Voyageur Outward Bound School plus another 10 seasons canoeing with friends while accumulating retirement funds as a research scientist and later as an outdoor program administrator. Now she has retired to Ely and guides a few WWD trips each year for pure enjoyment. You are guaranteed a happy guide with Martha.

Lisa was born and raised in Minnesota and has been an outdoor adventurer and educator since 2009. She has spent more than 600 nights in the Boundary Waters Wilderness as a canoe and dog sled instructor in the last decade. Lisa is a title-holding paddler including being the first woman to canoe the 4th longest river system in the world. She is a steady advocate for equality and environmental protection and loves taking that first sip of morning coffee on a Boundary Waters trip. 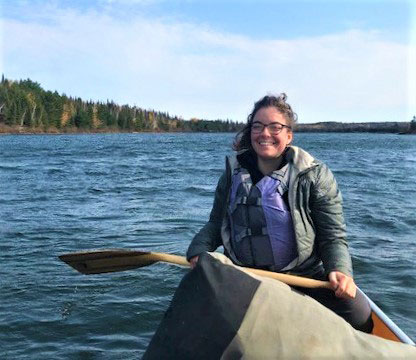 Zoe is a Vermont native, but she has thought of Minnesota as her true home ever since she discovered the Boundary Waters in college. She took her first canoe trip in 2011 and has been coming back to guide trips every summer since. In recent years she has also fallen in love with winter camping, especially the stillness of the nights and the uniquely rewarding feeling of thriving in extreme cold. Guiding new people through the wilderness is her favorite way of experiencing the outdoors. She loves to help novices and experts alike feel comfortable and empowered enough in the backcountry to notice new things that they love about nature, their companions, and themselves. She’s passionate about cooking good food on trail, and feels that a delicious meal is the best catalyst for a great day on the lakes. When she’s not guiding, Zoe is working toward her PhD in medieval French history at Northwestern University, with the hope of becoming a professor. If prompted, she’ll share some medieval tales on trail! 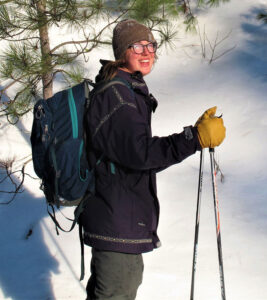 Rachel was born and raised in Minnesota, but didn’t discover the joy of the Boundary Waters until she picked up a job guiding trips in college. After that, she was hooked! Although she has worked across the country in Vermont, New Mexico, and Idaho, the Boundary Waters continues to lure her back to her home state. Rachel has worked in a lively variety of fields, from education to trail work to forestry and a little bit of everything in between. With Duluth as a permanent (ish) home base, when she’s not guiding she enjoys skiing, biking, knitting, journaling, making soup, and sneaking out of the Midwest to visit the mountains. 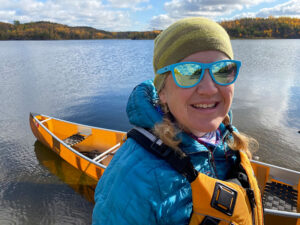 Pam Wright began her outdoor adventures by camping when her parents lived on Montana’s eastern prairies. Later, her family moved and made their home in Minnesota, exploring the land of sky-blue lakes and pine forests. For the past 20 years she has been adventuring and taking others with her to the BWCAW and other backcountry locations throughout the US and Canada. When she’s not dipping a paddle, she enjoys ultra-running, winter camping and backpacking. She takes joy in introducing everyone to the beauty of the north country, hoping that they too will be caught in the wonder of the wild.

BWCA rookies no more
“As 2 old (in both senses of the word!) friends and BWCA rookies we chose a Peta-led canoe trip as our retirement celebration. Peta possesses a vast amount of camping, canoeing, and botanical knowledge that she readily shares. She is equal parts cheerleader, teacher, coach. She pushed us just enough so we accomplished more than we thought we could. The food was delicious, the equipment top notch, the scenery gorgeous. The trip was a resounding success and so much fun. I would do it again in a heartbeat.”
Jane W Slaird