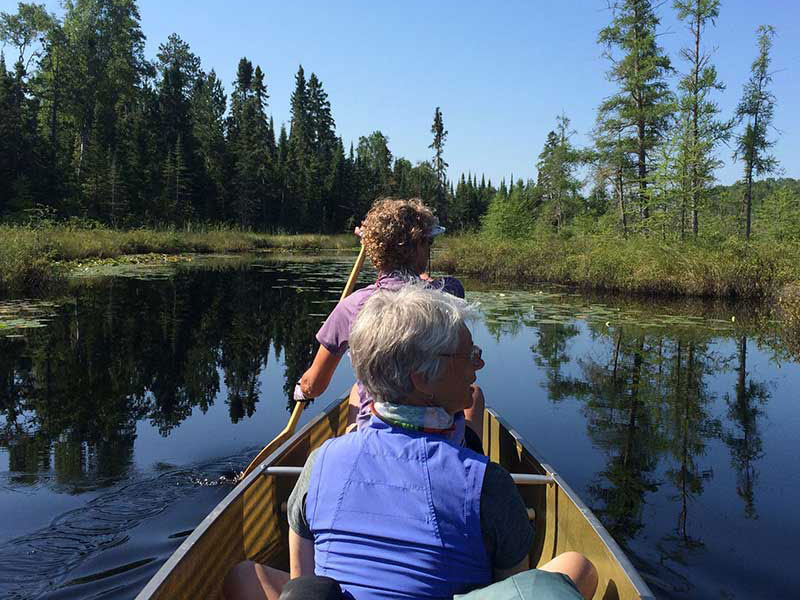 After owning a casting company for over a decade, Peta Barrett yearned to make the wilderness her “office.”

Driven by her lifelong love of the outdoors, Barrett moved from her home of 35 years in northern Anoka County to Ely, Minn., last year to start up Women’s Wilderness Discovery.

“I’m thoroughly buoyed up and inspired by the wild places surrounding me,” she said.

For Barrett, that’s true even in the winter; she doesn’t shy away from outdoor adventures in the colder months.

Although the vast majority of area outfitters close up shop this time of year, Barrett is of the opinion that nothing compares to “the pristine, fresh beauty of the frosted lakes and trees of the Boreal Forest.”

It’s the stuff of poetry: A glowing moon casts broad shadows over the land, while “seemingly millions of diamonds” sparkle on the snowy path, she said.

She continues to offer winter camping and day trips and workshops on everything from lacing your own Ojibwa traditional snowshoes to slack lining.

Her target audience is women and girls, though she also occasionally guides families and other mixed groups. Even in this day and age, she finds that people are often surprised to encounter women-only groups on the trail.

That said, many women are interested in venturing out into the wilderness, “but they don’t necessarily want to go for the first time with their boyfriend or husband. It’s a different chemistry that doesn’t always work so well,” Barrett said.

By contrast, for groups of women, it’s “a matter of finesse, working together as a team, and the camaraderie.”

It’s a unique niche and Barrett tries to make the experience accessible and affordable. Also, she tailors the trips according to a group’s needs and desires.

The winter season is somewhat unpredictable; in order to get by on snowshoes or skis, and be able to pull a sled that’s loaded up with gear across frozen lakes and streams, it’s important to have a good base of snow, she said.

Besides getting to and fro on the wild landscape, Barrett might show campers how to build an igloo-like “quinzee” or stay warm while sleeping under the stars.

She also uses a certain type of canvas tent and a small wood stove. One can put on a pot of coffee, “take the chill off or dry some damp clothing” and listen to the ice booming or go ice fishing, she said.

Janet Meier of Hutchinson, Minn., who has gone on numerous trips with Barrett since meeting her 20 years ago, was timid about winter camping at first. However, with Barrett as her guide, she’s fully embraced it. Barrett makes it so that “you don’t dread winter. It’s just another season of playtime.”

She’s constructed a quinzee (sometimes Barrett even digs out little windows and decorates them with candles), gone snowshoeing in and around the Palisades and embarked on numerous Polar Plunges.

The snowshoes that she made with Barrett are hanging up at her house, as decorations.

Trips with her Soul Sisters, as they call themselves, are a chance to “decompress, cleanse the soul,” Meier said.

Rose Chilcoat, the associate director of Great Old Broads for Wilderness, a national organization that encourages senior environmental activists, got connected with Barrett earlier this summer when the group hosted a “broad walk” themed around the Save the Boundary Waters campaign.

A group of Great Old Broads traveled to the area to learn about the threat of sulfide-ore mining. Barrett catered their meals and, afterward, she led eight of the women on a five-day canoe trip through the area.

Despite a range in ages from 36 to 82, Barrett “empowered everyone to do what they were comfortably capable of. It instilled confidence that all of us could do anything as a team,” said Chilcoat, who lives in Durango, Colo.

Barrett taught them “about the place, the issues, the natural history, how to travel through the landscape leaving no trace, the cooking style,” and more.

Barrett’s “obvious love of place and joy in sharing it with others, that came through,” Chilcoat said.

For Barrett, it’s fulfilling seeing women and girls “finding something inside them that grows and blossoms.” Hence, her company’s tagline is “Discover your inner strength outdoors.”

She doesn’t for one moment regret giving up a long commute filled with stops and starts and other trappings of the city.

What is it about the woods? “The solitude, beauty and a little hard work just seem to lift spirits and enrich lives,” Barrett said. “It’s where I ‘recharge my batteries.’”

Anna Pratt is a freelance writer in Minneapolis.

Overcoming Fears Through Wilderness Experience
“I took a BWCAW day trip with Peta and my husband early September. At age 50 I am a major rookie paddler and outdoor enthusiast. Peta proved to me that you can teach an old dog new tricks. Honestly, I struggled a bit on our trip. My experience in wilderness exploration has been walking a gravel road with my dogs or following a groomed trail. I haven't been off the beaten path very often. My curiosity of the wilderness lead me to Peta and her company Women’s Wilderness Discovery. Fear keeps a person from living life to the fullest, I can attest to this. At age 50 I look back in shock at all I never did because I was afraid. No more. My day trip with Peta and my husband was "gentle." But, when you allow fear and self-induced insecurities to leach their way in, gentle becomes challenging. After a few falls in the muck and struggles paddling straight, my day ended leaving me feeling hopeful about this next stage of my life and even more curious about the beauty of the wilderness. I am inspired by the woman Peta is, and so humbled by the way she helped me realize the strong woman I am also. Thank you, Peta! I really do look forward to our next adventure.”
Kim Schneider